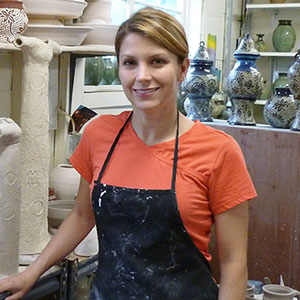 As a reflection of my own military experience, I explore the juxtaposition of US service women in combat with the domestic and decorative nature of heirloom tableware. Using the notion of “serving” I create objects associated with serving a meal depicting military women serving their country. Female soldiers in a war torn landscape are surrounded, not by enemies but by traditional floral borders embellished with gold and soft feminine colors. By combining military iconography with traditional floral elements and botanical patterns I subvert the once benign decoration while creating a personal narrative and contemporary social commentary. Through non-traditional imagery I seek to challenge the entrenched ideas of domesticity and gender roles while exposing the social and cultural issues faced by military women. This work encourages dialogue about pervasive social dynamics that prevent something perceived as violent and destructive from also being considered beautiful.

Jessica Putnam-Phillips is a ceramic artist, US Air Force Veteran, illustrator and activist. She received her Masters of Fine Art in Visual Art from Lesley University and her B.A. from UNC-Wilmington. She was a resident artist at the Saratoga Clay Art Center and recently attended residencies at Haystack Mountain School of Craft and A.I.R. Vallauris, France. Jessica’s work has been included in numerous exhibitions nationally and internationally. She was one of the award winners in the 2015 Zanesville Prize and was named by C-File as one of the 2016 potters to watch. In addition to maintaining her own studio practice Jessica is a board member of the Vermont Crafts Council and teaches ceramics at the Community College of Vermont and the Vermont Arts Exchange in Bennington.