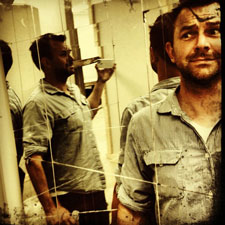 As an artist, I work primarily with clay, taxidermy, cast plastic, and a few other media. My visual language is based on that of autonomous, decorative art objects (figurines, trophies, souvenirs). Within a domestic space, I’m intrigued by the ability of an encapsulated aesthetic to establish, defy, and challenge characteristics of culture and class. As a reflection of my own upbringing I’m drawn to the challenge of taking disparate materials and cultural references, that when submitted to finely crafted and obsessive dedication, can exceed the context of either its media or class.

I often use animal specimens. While often a formal decision as much as a cultural reference, it does force me to acknowledge my conflicted consumptive role. To some extent, I am interested in the ego attached to this process and sometimes find myself building the skillful ceramic “settings” in attempt to justify the death or at least return a level of honor lost in the animal’s passing. I make no attempt to be a moral compass on this subject. My work is simply a personal study of my own hypocrisy as a participant in the notion of both honor and consumption.

While I can diagnose every formal decision within any specific piece I’ve made, I have a difficult time attempting to encompass all of the work within too tight an ideology. I can better discuss its evolution, as it is generally still, the continuation of a struggle to reconcile my personal identity.