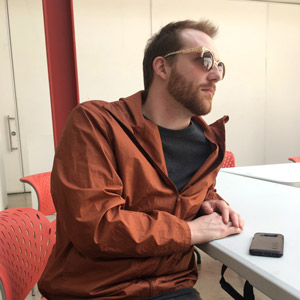 As an object maker I create a dialog between objects and plinths. The work begins to examine the structures under which an object becomes an object. In exploring what constitutes an object, it is important to consider at what point we stop seeing individual objects and start seeing systems of objects, and the relation between those two determinants.

Specifically, the conditions of display for objects versus the individual object itself has become the heart of my practice. The work exists in the contested space between object and pedestal. If we see only what makes the object we lose sight of its place. If we see only the pedestal we lose sight of the object, looking only at what its relationships are. Considering the difference that occurs between these two we might have a better grasp of the object itself. The work is an attempt to construct a logic in which to better see objects, both as discrete and in relationship, and to understand from that relationship the object itself.

We pay the most attention to something when it doesn’t fit right. When something disrupts our normal routines and reminds us of something it is not, we see the object for what it really is. Seeing and being aware of this difference is what interests me. The object versus plinth acts as a way to seek at what point an object enters into our consciousness. Do we see the installation as a singular unit or do we see the singular units with in the installation? This same type of conversation occurs when considering the individual pieces, forms emerge from organic mounds gathered next to geometric planes, and color begins to flatten and obliterate form. The median of the work become the systems under which production of form occur, producing an array of objects that all relate, both in kind and in type. As a catalyst for conditions of display the separation of object and plinth become more blurred in the same way that color begins to mask form. Both strategies result in a methodology that attempts to distort our understanding of both individual objects and unified installation.

In many ways the work attempts to take these systems to create abstracted representations that connect to the way we see and think about objects, the way objects relate to other objects, while also questioning the relationship between part and whole.

John Shea graduated with a BFA from the School for American Crafts at RIT in Rochester, NY in 2011. From there he traveled Montevallo, AL to be a resident artist at the University of Montevallo. Afterward he moved to Portland, OR working for Bullseye Glass and Mudshark Studios. He has most recently moved to Madison, WI. John is currently a graduate student at the University of Wisconsin - Madison where he will be graduating in the spring of 2018.