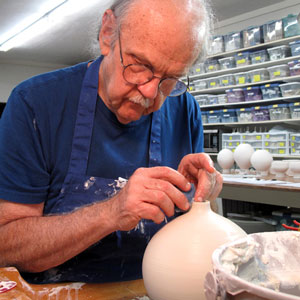 My work is high fired porcelain, hand thrown, with layered glazes. The forms are simple and organic. They are the result of constant refinement -- the simple that lies beyond complex. I strive to give the pots a breath inside, and the kind of life that makes them reveal new things to the perceptive viewer as his or her vision deepens. I always try to hide my hand, so it seems as if the pot just appeared out of the depths of the universe.

I began making pots in 1968 while working toward a Ph.D. in Mathematics. A chance meeting with pottery, and I became inspired. That inspiration has lasted my whole career, enhanced by moving to a meditation community in 1978, and by a deep study of historical and traditional pottery.

All of the glazes I use are of my own formulation, and mostly of the crystalline variety. My glazes have continually evolved since 1968, the result of over 30 thousand glaze tests. I brush the glazes in micro-thin layers and build up the correct thickness with many coats. I find that just two-thousandths of an inch in glaze thickness can make the difference between a glaze that works and one that doesn't.

I make the pots I love to make. I continue to be inspired and informed by historical pottery, by a fascination with the micro- and macro-universes, and by my lifelong effort to quiet the mind through meditation.

John Tilton was a graduate student working toward a Ph.D. in Mathematics at the University of Florida when he was introduced to clay as an artistic medium in 1968. He subsequently took up Ceramics as a profession, earning his M.F.A. in Ceramics from the University of South Florida in 1972.

He has taught classes in Mathematics at the University of Florida and in Ceramics at Santa Fe College in Gainesville, FL. He has been an independent studio artist since 1972. In 1978, he moved into a spiritual community, where he and his wife, Anne, still live and maintain their studio.

From 1999 forward, he was selected for inclusion in Marquis Who's Who in America for his work with crystalline matte and other art glazes. His work has been recognized with a State of Florida grant and with numerous Best In Show and Best In Category awards in juried competitions, as well as with other honors (see Resume for more details).

He has exhibited nationally and internationally. In 2013, his work was one of two artists' selected to represent the United States in the Exposition de l'Art Actuel France - Japon avec participation multinationale, National Art Center, Tokyo, Japan