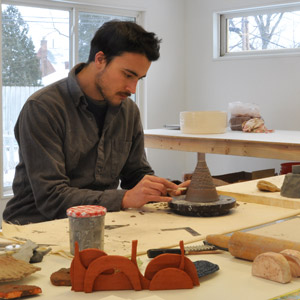 “The desert is no longer a landscape, it is a pure form produced by the abstraction of all others” – Jean Baudrillard, America.

I combine the intuitive handling and physical attributes of clay with magazine photographs to give way to a relationship between perception and conception – between reality and the imagination. A direct bricolage and framing within the work collapses the ceramic material and pictured backdrop into the same visual field. It is in this collapsed moment that I am able to create a space that is simultaneously influenced by both natural and mediated landscapes. Acting almost as a mockery to camouflage, the pieces often aim not to overtake the scenery but rather to be a part of it. The motions I make in the studio, whether it is the gestures made with the clay or a layering of underglazes respect the landscape’s nuances in an attempt to merge with it. This reversibility of these rendered landscapes serve simultaneously as personal markers (cairns) as well as prompts for our experience and culture with nature and place.

Jon P. Geiger (b. 1987) received his BFA in ceramics from the University of Colorado, Boulder in 2010 and an MFA in ceramics from Cranbrook Acadmey of Art in 2014. Geiger’s process is influenced by both natural and mediated landscapes with the resulting product intended to serve both literally as a personal marker and figuratively as prompting for our experience with nature and place. Jon has exhibited in numerous solo and group shows including Barometer (Interface Gallery, Oakland, CA), No Empty Vessel (Gildar Gallery, Denver, CO), A Durable Canon (Good Weather Little Rock, AR), and A Place to Rest the Head (Holding House, Detroit, MI). Geiger’s work can found in permanent collections of the Cranbrook Art Museum (Bloomfield Hills, MI and New Mexico State University (Las Crusces, NM). He lives and works in Detroit, MI.