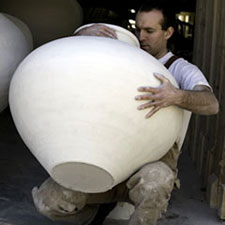 In my family, my parents’ generation included five potters. All four of my grandparents lived in civilian work camps because both of my grandfathers were conscientious objectors during World War II. My paternal grandfather was an important lobbyist in securing the Congressional votes to pass the Civil Rights Act. All four were unapologetic in their love of puns. My sculpture embraces my cultural and familial legacies.

My family’s irreverence for, and playful love of existing cultural and linguistic forms shape my studio strategies. When my work bridges the coexistence of two or more contradictory sculptural forms, it also bridges what is not right in the world with my highest cultural aspirations. That bridge sways in the wind.

Jordan Taylor was raised Quaker in the Midwestern US, and after undergraduate work at Earlham College, Richmond, IN, apprenticed for three years with Master Potter Mark Skudlarek. In 2002 he established his own studio in rural Northeastern Pennsylvania, based on wood fired, functional ceramics made from indigenous clays and glaze materials. In 2010 he moved his studio to Chapel Hill, NC where he still maintains a wood fired kiln. His recent work has included large scale public installations, residential design of earthen walled houses, and citywide charitable events, as well as gallery based sculpture. He is an avid whitewater kayaker and open canoeist and his esthetic sensibilities are informed by fluid dynamics and reflective surfaces he encounters in immense river rapids, like on the Ottawa River in Ontario, Canada, and in the thermodynamics and venturi forms of natural draft kilns. Taylor recently completed his MFA at the Rhode Island School of Design, in 2014. There his thesis work investigated Ceramics as a revolutionary act in the form an architecturally scaled public art proposal for Downtown Providence, RI that re-appropriates the economy and ecology of a traditional kiln site to address issues related to mass incarceration.

Taylor is currently Artist in Residence at Theaster Gates Studio in Chicago, IL.