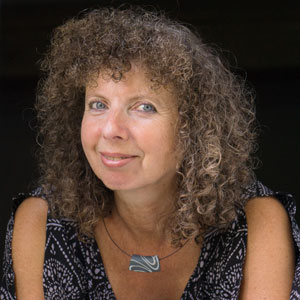 The ceramic work of Judith de Vries is made out of French porcelain clay from Limoges, which she mixes with different colour pigments. The bottom parts of her vessels and bowls are often thrown on the wheel, while the top part is build up by slabs with complex decorative patterns. These patterns are made piece by piece with multiple strips of coloured clays. The colours go right through the piece or, when using a backing slab, the white from the background shows as very thin lines between the strokes of pattern in front. Like wise, colours from the front show like the thin veins of floral petal on the reverse of slab, that is, on the inside of the pot. This patterning always leads the eye from base to crown, so that you think you are witnessing one of those wonderful delayed shots of an opening flower from a nature programme on television.

Judith thinks the vessel with the rim as a border from inside to outside is an exciting vehicle for expressing ideas.

Ceramics is the art of earth and fire, but in Judith’s work, also the art of air, water and light. Her bowls seem to have collars of lace, which have the quality of the greatest discovery of nature that is found in wings of butterflies, fishes, shells and in the rainbow, It’s the jewel of the goddess Iris………iridescence

Who can even think of projecting the highest trump of nature on such an elementary thing as clay ? Judith de Vries does, she’s the inventor of the ceramic rainbow and the ceramic art of weaving. All pure nature and pure logic. A matter of unraveling things to make a work of art that is as natural as nature itself.

And what about form and function ? There exists (according to a somewhat constructive biologist Adolf Portmann ), form that doesn’t follow function and only can be seen as self presentation.. Such an insect says; “I am beautiful and remarkable just like this, for my own pleasure.”

This applies, if it’s true or not, to the rainbow and Judith ‘s work. It is a delight for the eye, the senses and itself.

After graduating from art school in Amsterdam in 1983, she went for a working period to the European Ceramic Workcentre in The Netherlands.

In 1984 she was rewarded a stipendium for starting Artist from the Ministery of Art and Culture.

She has always been combining her own studio work and teaching.

She had many teaching posts in the Netherlands and the last few years she gives workshops and masterclasses abroad; Germany, Switserland , Belgium and the Netherlands.

She had many exhibitions in The Netherlands and abroad; China, Italy, Switserland, Germany, Belgium. Her work is in several collections o.a. Museum Boymans van Beuningen in Rotterdam and the Design Museum in Gent.

Articles about her work are published in many national and international books and magazines.