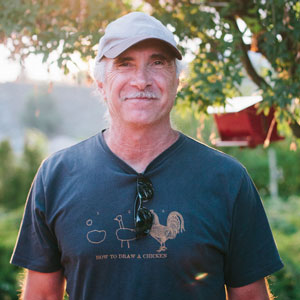 I am most interested in things that “wear” their history: objects, or fragments of them, that possess a particular quality from being well-used. In my ceramic work, inspired by things I have scavenged, I often invent my own “found” objects and materials. I try to create in them a sense of age comparable to actual objects I have collected. The life story that each object could tell remains a mystery, but the hint of its past adds another layer of richness to my pieces.

In my more recent work, I have made clay “fabric” to dress up my characters and clay tape and stitching to hold them together. Since facial expression is so important in defining the personality of each of my figures, using wrinkles, tears and holes in the clay fabric has opened up new and exciting options for developing these personal traits.

My pieces are constructed from earthenware clay and fired to cone 03. Surface color is developed with underglazes, glazes, stains and sometimes lusters. I often begin my pieces with a wide variety of wheel thrown forms and put them together in combination with other elements; sometimes extruded pieces, sometimes press-molded or handbuilt. During this process, I try not to be too cerebral, but instead, attempt to react directly to what is visually in front of me and trust my instincts.

Often, as I am working, these pieces take on a life of their own and it is interesting to me that some of my characters seem worried and perplexed, some quizzical and amused, some mischievous and playful. As I live with these characters, I believe that they speak to me about myself.

Keith Schneider is a ceramic artist and Art Professor who lives and works in Arcata, on the northern California coast. He received his MFA degree from the University of California at Santa Barbara in 1985, and has been teaching ceramics and drawing at Humboldt State University since 1987. Keith’s ceramic figures are exhibited throughout the United States, and he has won numerous awards, including first place in Feats of Clay 2003, a prestigious international ceramics competition. His work has been featured in a variety of publications, including Ceramics Monthly magazine, and his work has been featured at SOFA (Sculpture Objects and Functional Art) in Chicago, for the past several years.