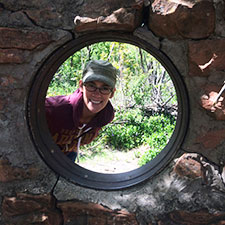 The process of coiling and pinching clay gives volume and mass to my thoughts and is an integral part of my creative practice. The marks left in the surface are the indelible record of this method. Through its material affordances, porcelain has an uncomplicated way of encoding the marks of my hands, storing those actions and recalling them to the world on its surface. This specific material exploration assists in the construction of my perceptions of time, narrative, and self through the tangible and permanent characteristics of clay juxtaposed with the ephemeral nature of light and shadow. I am ultimately concerned with the exploration of humanistic ideas about existence, agency, relationships, memory, and mortality.

Porcelain is strong and dense, yet fragile in tensile strength as a material. Once it is fired, whether in shards or as a complete object, clay will never cease to be stone- like in its permanence. By re-creating objects from our everyday world, I am attempting to elevate ordinary things such as graters, pairs of goggles, and buckets to a position of aesthetic and emotional value. The process of coiling and pinching lends humanity to the surface of pieces that in ordinary life would be inert objects.

I use the fleeting nature of light and shadow to consider the difference between objects that are present and what fills a space in their absence. I am interested in how light provides our surroundings and the objects in this world with a physical presence and illuminates the spaces in-between. I examine how the atmosphere and our perceptions surrounding the objects change as the time, day, or season alters the light around us. My application of color through reflected light on a saucepan and overturned cup, or a spray of fiber-optic strands in to a wash tub, is an experiment in manipulating atmosphere and emotion or sparking memory.

I employ drawing as a way to illustrate the relationships between objects and the space around them in another dimension. Taking advantage of the soft, smudgy qualities of chalk pastels, I translate shadows from a stack of dishes into a new form. I erase the outlines of some objects, leaving a hint of contours and marks in order to magnify the idea of absence. The process of drawing assists in my exploration of the essence of everyday objects and the ethereal nature of what happens in-between.

There is intentional ambiguity among the groupings of objects I create and in their relationships to each other and their surroundings. Examples include an arrangement of a bucket containing egg shells, a ladle, and a garden hose on a surface reminiscent of a deck. I create scenarios that conjure the familiar, but whose narratives recall instances of hesitation and uncertainty through the use of timeless utilitarian objects and their physical shadows.