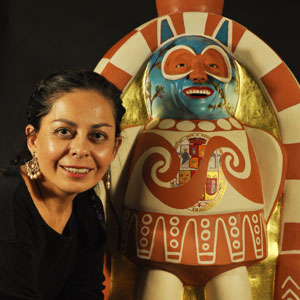 I am a Peruvian-American artist. My work, which revolves around the consequences of colonization in Latin American contemporary culture, is a visual investigation about aesthetics, cultural survival, and inheritance. I focus on Latin American history, particularly that of Perú, because it is the reality with which I am familiar. I do so, convinced that its complexity has universal characteristics and any conclusion can be understood beyond the frame of its uniqueness.

At the present time, I am working on a project titled CORPUS: Contemporary Art and Historical Identity. A Study of Peruvian Aesthetic Heritage Through Art. It consists of ceramic sculptures, based on Catholic icons which conform a festivity known as Corpus Christi in Cusco - Perú. In addition there will be a video component to be screened over either original or exact replicas of pre-Columbian figurines, depending on the venue’s location.

CORPUS narrates the history of my country of origin, incorporating pre-Columbian and Colonial sensibilities by visually mimicking syncretism within a contemporary narrative. My concern with this issue coincides with the aesthetic and cultural decolonizing actions that are taking place now around the world. Colonization and coloniality have for centuries forced populations to dismiss, among other things, their regional aesthetics, including their understanding of personal beauty. The consequence is the belief that a universal aesthetics exists, though it is actually rooted in European canons of beauty, which do not correspond to all populations. What overwhelms public advertisement and TV programming in Perú are people who have non prominent indigenous features, and do not reflect most of their audience. I am aware I am Western but I feel that populations who are like me are mostly observers and usually followers.

Unable to find themselves in today’s “universal” aesthetics, many are either creating alternatives that suit their taste or ones that respond to their ancestral history. It is a search for dignity, the one lost through centuries of imposition and disdain.

Kukuli Velarde is a Peruvian artist based in the United States since 1987. She earned her BFA degree (Magna Cum Laude) at Hunter College of the City University of New York. Her exhibition credits include: KUKULI VELARDE at AMOCA, 2017; CORPUS video, Mercosul Biennial Porto Alegre, Brazil 2015; PLUNDER ME, BABY at the Yingge Museum of Ceramics’ Biennial of Taipei, Taiwan 2014; CORPUS (work in Progress) at the Gyeonggi International Ceramic Biennial in South Korea 2013 (Grand Prize winner); KUKULI VELARDE: PLUNDER ME, BABY at the Nerman Museum of Contemporary Art in (Kansas city, KS in 2013); PATRIMONIO at German Krüeger Espantoso Gallery-ICPNA (Lima, Perú, 2012); PATRIMONIO at Barry Friedman Gallery (NY, 2010); and PLUNDER ME, BABY at Garth Clark Gallery (NY, 2007).

She is married to Doug Herren, sculptor and they have a small daughter named Vida. They live in Philadelphia, PA. USA.