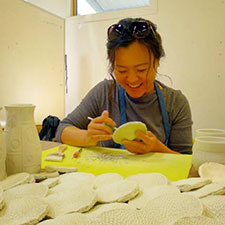 My work has been strongly influenced by the elements of nature. Nature is the unifying subject in my carved porcelain objects; through depicting it, I am able to express the emotions and experiences of life. I unite the opposite qualities of fullness and emptiness by using positive and negative space--and use graceful, flowing lines to reveal a harmonic balance. To capture the sense of the movement of nature, I use celadon glazes; specific hues and tones function to heighten the expression of feeling in my work.

I use wheel throwing to make a form and alter it by adding to it, cutting it, and tapping it. Once a new form is created, I draw lines and hand carve the surface decoration. Organic, flowing lines and pooling glaze emphasize the movement of water. For surface detail, I repeat patterns to create a realistic texture. For example, poking the surface of a piece with one pin tool for hours creates a coral texture, which is left without glaze to keep the detail. This surface depicts the contrast between shiny and matt, smooth and rough--like Yin and Yang.