Kyungmin Park - "Under the weather"

Kyungmin Park - "NO means NO!" 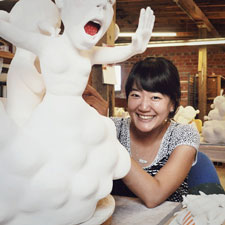 A child’s untamed imagination can create a new and exciting world out of a single object. The combination of an uncorrupted point of view, a strong imagination, overflowing curiosity, and the desire to push boundaries creates a very special mindset particular to children. The adult world, by contrast, restrains the formerly infinite imagination by imposing responsibilities and practical concerns. Society puts limits on the way we as individuals can perceive things, and as an artist I am interested in expanding those confines. Inspired by the perspective of childhood, I seek a sort of regression to a childlike state of mind, so that I can create and explore a place beyond these boundaries.

In my sculptural clay objects, I often create figures in fantastical situations and imaginary worlds. Though the facial expressions of the figures evoke the imagery of childhood, the bodies are adult, suggesting the remnants of the child within the grownup. The coexistence of innocence and experience within one being has an unsettling effect; viewers are made uncomfortable as the whimsical gives way to the darkly bizarre.

The scenes I create also often include amorphous forms under or between figures to express unbounded imaginary space to the viewer. It has its own movement, like clouds or water, and can take any shape that a child may imagine. Bright colored surfaces on these forms attract the eye initially, drawing the viewer into the scene in anticipation of a new experience. However, on looking closer, the viewer faces unpleasant and unexpected movement, actions, or expressions in the figures; he or she must make sense of these anomalies within the rules and restrictions imposed by the experience of adulthood. It is my hope that by combining so many elements of a child’s imagination with those of the adult world – replete with the darker emotions that characterize it – I will create a space for each viewer to have a unique and personal introspective experience.

Kyungmin Park was born in South Korea and began studying ceramics while living in Seoul. She earned her B.F.A in 2006 from New York State College of Ceramics at Alfred University and her M.F.A from the University of Georgia in 2012. After graduating from UGA, Kyungmin taught Ceramics at Auburn University until 2014. Kyungmin was awarded the Windgate scholarship to work at the Archie Bray Foundation as a summer resident artist in 2014. Currently, returned as a long-term 2015 Matsutani Fellow at the Bray.