Lauren Gallaspy - "one need not be a house to be haunted"

Lauren Gallaspy - "giving up the ghost" 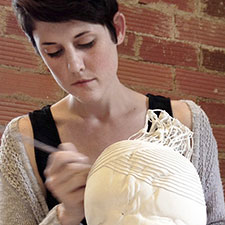 The things that I love and the things that I fear refuse to balance out. They scrap like cats, cloak and conceal like kudzu, terrify and delight, like a large, shaky lake or a dog swimming hard towards a floating ball.

My work is about that imbalance: the vulnerability of living things and the sometimes violent, sometimes pleasurable, almost always complex consequences that occur when bodies and objects in the world come into contact with one another.

Clay is utilized in this activity as a covert material: a wilderness in which animals of association my hide, a co-operative contradiction both molecularly and metaphorically.

Lauren Gallaspy received her BFA in ceramics at the University of Georgia and her MFA from Alfred University in Alfred, New York. She has exhibited widely in galleries, museums, and at conferences nationally and internationally since 2004. Her work and words have been published in Ceramics Art and Perception, The NCECA Journal, Ceramics Monthly, Clay Times, 500 Cups, and featured on the blogs for both NCECA and the American Craft Council. From 2009 to 2012, Lauren served as co-director and owner of Trace Gallery in Athens, Georgia. In 2013, Lauren was recognized by the National Council on Education for the Ceramic Arts as an Emerging Artist in the field of ceramics and by the Society of Contemporary Craft as an Elizabeth R. Raphael Founder’s Prize winner in 2014. Additionally, she was one of 25 artists awarded the $25,000 Joan Mitchell Painters & Sculptors Grant for 2012. She is currently Assistant Professor of Ceramics at the University of Utah in Salt Lake City.