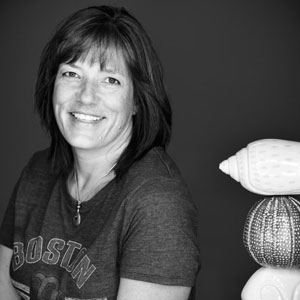 It wasn't until I was in my thirties that I discovered my love for clay. In early childhood I wanted nothing to do with Barbies or baby dolls. It was all about Crayola, Spirograph, Lite-Brite and Etch A Sketch for me. At the ripe old age of four I would declare myself an Artist to anyone who asked “What do you want to be when you grow up?”

The decoration of surface is the most integral part of my pottery. It pays homage to my beginnings as an illustrator. After throwing porcelain forms on the potters wheel I apply a black slip. When the slip has dried I carve through to the white beneath in a process known as sgraffito. The images that I enjoy carving include birds, plants and small animals. Basically things found in nature.

With my garden totems I'm able to stack various small forms together to create larger, quirky, sculptural-like statements. These totems are based on my memories and journeys in nature. The recollection might be shelling on the beach, hiking in the mountains or running through the rows of plantings in my grandparents' nursery business.

Recently I set out to familiarize myself with the process of low-fire earthenware. I developed slips, colorful glazes and created a whimsical line of animal pottery. These are made with children in mind and for any of us still young at heart. I've also started making tile and designing mosaic surfboards from my studio in Florida.

I take the craft of pottery seriously and strive to have lots of fun making it. Each of my creations are small pieces of myself meant to go out in the world and bring joy and smiles to the their users.

Laurie Landry is a St. Petersburg, Florida ceramic artist. From the age of four she knew that she wanted to be an artist. Toys such as LiteBrite, SpiroGraph, and Etch-A-Sketch illustrated her instinctive attraction to art.

Laurie decided to pursue a career in the world of advertising, and enrolled in the Commercial Art program at Hennepin Technical College. During this time she spent summers working as a Sign Shop Apprentice in Forest Lake, MN and created many signs and painted boat names at the lake. Upon graduation, Laurie began her advertising quest, first as an Illustrator at an advertising agency, then becoming the Art Director at the firm. For more than 10 years she worked in the commercial printing industry as a job planner and purchaser.

During her time in the printing industry she sought out a creative outlet for her talents.

Upon moving to the west metro of Minneapolis, Minnesota she enrolled in ceramic classes at the Minnetonka Center for the Arts and became hooked on clay. Her carved pieces showcase her talent as an illustrator and make her pottery unique and recognizable. In 2002 she and her husband built a 1,000 square foot ceramic studio on their Minnesota property. In 2013 they relocated to the warmer climate of sunny Florida. She made a studio space out of the lower level of their home. She sells her pottery at art shows, studio sales, through her website and exhibits in galleries.