Ceramic, ink and gouache on paper

Ceramic, ink and gouache on paper 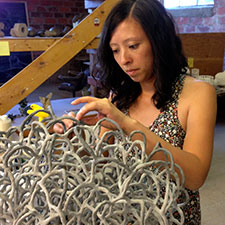 I resist acknowledging that the objects inhabiting our lives are inanimate. By considering the objects’ needs, and denying our needs for those objects, they can expose a life and language of their own. A stack of books hidden by a blanket of dust waits patiently to fulfill its purpose. The books appear to be aged and desolate, yet shielded and protected by time and neglect. By carefully observing the relationships between the things around us, I have found them to reveal their physical and psychological states that often go unnoticed. In this realm, objects are personified, perception is ever changing, and things become their true self.

Linda Lopez (b. 1981 Visalia, California) received a BFA in ceramics and BA in art education from California State University of Chico (2006). She received a MFA in ceramics from the University of Colorado at Boulder (2010). Lopez has exhibited her work in New Zealand and throughout the United States including Robischon Gallery, Denver; Vertigo Art Space, Denver; The Clay Studio, Philadelphia and the Center for Emerging Visual Artists, Philadelphia. She has been an artist in resident at The Clay Studio in Philadelphia and has been featured as an Emerging artist in Ceramics Monthly. In 2013, she was a resident at the Archie Bray Foundation and opened a solo exhibition at Greenwich House Pottery in New York, NY.