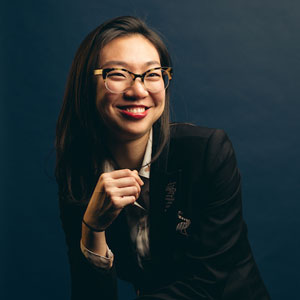 As an object maker, my acts of making are driven by spontaneous gesture and expression and informed by the multifaceted nature of both my cultural identity and my studio practice—ceramics, color, painting, and hair. Ultimately, my intention is to activate my chosen materials in such a way that they become conductors of new meaning.

Ling Chun (b. 1990) born in Hong Kong, a society that built upon a hybrid system of western and eastern. A foreign exchange program brought her to the United States at the age of seventeen. She then earned her BFA in visual communication design and ceramics from the School of the Art Institute of Chicago in 2012 and her MFA in ceramics from Rhode Island School of Design in 2016. Chun has been focusing on the physicality of materials separating from their stereotype and cultural reference by questioning their authentic use and redefining them in her language. She has been an artist in residence 2012-13 at Seward Park Clay Studio in Seattle, Washington, a summer artist resident at Arquetopia in Puebla, Mexico in 2015 and c.r.e.t.a.rome, Italy in 2016.

She is now a current long-term resident 2016-18 of Archie Bray Foundation, Helena, Montana, where she continuous her studio practice.