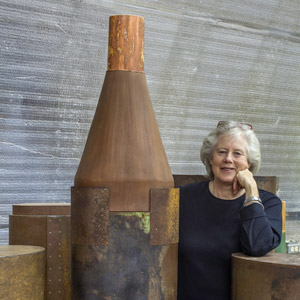 Lynn is a Founding Trustee of Watershed Center for the Ceramic Arts and was the Program Coordinator and Artist-in-Residence for The Watershed Workshop for People with HIV/AIDS. She is a co-founder of Sawyer Street Studios, an artist-owned ceramic facility in South Portland, Maine. She is a recipient of the Maine Crafts Association 2012 Master Craft Award, and was the first visual artist to receive Portland, Maine’s YWCA Women of Achievement Award. Lynn was an Emerging Artist at the 2004 NCECA Conference (National Council on Education in the Ceramic Arts). She has received grants from Appalachian State’s University Research Council and the university’s Foundation Fellows, the Maine Arts Commission and Watauga County Arts Council.

Lynn’s work is represented in numerous publications including Discovery: Fifty Years of Craft and Transformation at Haystack, Carl Little, ed., The Best of Pottery edited by Jonathan Fairbanks and Angela Fina, Dry Glazes by Jeremy Jernegan and a cover article by Glen Brown in Ceramics Monthly, “Lynn Duryea: The Energy of Edges”. Lynn’s work has been exhibited extensively. Group shows include the 2016 Maine Biennial at Center for Maine Contemporary Art in Rockland ME, Contemporary New England Ceramics at the Currier Museum of Art, Manchester NH, and International Emerging Ceramic Artists Invitational Exhibition, FuLe International Ceramic Art Museums, Fuping, Xian, CHINA. Her work is in the museum’s permanent collection.