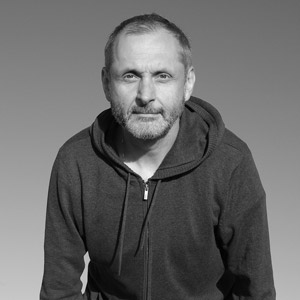 I am interested in the mutual relations between form and function of an object. It is connected with my belief in an exceptional aesthetic value of every-day items. Functionality comes for me as a starting point for analyzing an aesthetic form.

In my works I strive for maximum 'pure', simplified solids, free from any single useless detail. At the same time the simplicity is not my aim just like this, it comes as an effect of searching for an appropriate shape resulting from the aesthetic analysis.

No matter to what extent my works are abstract, the functionality aspect is always present. In some cases it is clearer (as in non-functional forms), in others it focuses on some concepts and some ideas connected with functionality.

Polish artist-designer Maciej Kasperski was born in 1969. He graduated from the Academy of Fine Art and Design in Wroclaw in 1996. He is now a professor at the Ceramics Department of the Faculty of Ceramics and Glass (PhD 2007).

He is active exploring the joining point of sculpture and design. He constantly searches for a level of common existence of functional items and artistic objects. He has participated in numerous exhibitions presenting installations and ceramics objects. Recent actions are shows of Worn Ceramics that have taken place in city public spaces. These are objects fitted to bodies, a kind of mobile sculpture worn by chosen models.

In 2000 he was in an artistic residence at Myers School of Art, University of Ohio, USA. He won a scholarship from the Lower Silesia Marshall, 2009; The Minister of Culture and National Heritage Scholarship, 2010. Honorary mentions: 8th International Ceramic Competition MINO, (design category), Mino, Japan, 2008; Keramik Europas, 13. Westerwaldpreis, Keramik Museum, Höhr-Grenzhausen, Germany, 2014. He participated in over 100 group and solo shows.