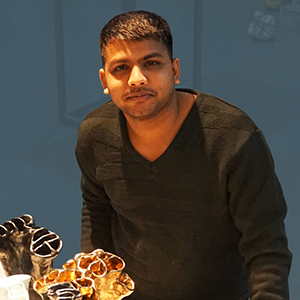 I admire every particle of the Universe which is filled with beauty. The Nature is constantly changing which is sometimes constructive and sometimes destructive. These natural changes create curiosity in my mind which is expressed by my artworks. Being attached to nature by birth I always wonder about natural creations. Seed germinates into a sapling and finally in to a tree, completing its life cycle akin to human life. Despite the similarities and deep relations, humans are being torn away from joys of nature day by day. Nature and subjects related to it have always influenced me deeply.

Changing colors and shapes of leaves by effects of sunlight, random advancement of roots, and construction of buildings tell us that there is a form everywhere. Blooming of flowers in a group, proliferation of mushrooms in a bunch, germination of seeds almost simultaneously yet with peculiarities, and hanging of fruits in a bunch, all have entered my works. These random forms are made up of units in various geometrical forms. I am using shape of these geometrical forms in my works which interest me a lot.

Nature as a subject is vast and it’s extremely difficult to describe it appropriately in any medium i.e. in words or art forms. We are nothing but mere spectators in front of the great art of nature itself. We are just trying to imitate some of nature’s arts and I am doing it by the medium of my work. I hope you will like my work.

Hello everyone! Welcome to my world of ceramics. I am Madan Singh from Rakhauna village of Varanasi (also known as Kashi), India. I was born on 5th August 1989. Varanasi is famous as the city of lord Shiva and is holy city for many religions. Its 10 kilometers from Sarnath where lord Budhha preached his first sermons after getting enlightenment. My parents are farmers and my two elder brothers including myself decided to explore different career paths than the traditional one. After getting inclined towards the fine arts, I received my B.F.A. (Bachelor of fine arts) from Banaras Hindu University, Varanasi & M.F.A. (Master of fine arts) from Kala Bhavana Visva Bharati University, Santiniketan. After my formal education I joined one of the most prestigious schools in India “The Doon School“ where I teach “Ceramics art” to young students right in the beginning and continue to explore the world of ceramics in my studio and outside the studio.