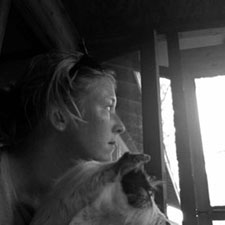 My work is a contemplation on material, process, and object metaphors that juxtaposes the medium of clay with industrial materials to create installations that speak of landscapes lost. Inspired by the landscape of my agrarian childhood home now covered by suburban sprawl, I strive for these works to be spaces and scenarios the viewer can physically or psychologically enter and inhabit, that calls one to pause and witness the result of my consideration of the changing landscapes that surround us.

I employ the medium of clay in unconventional ways to accent the metaphorical capacity of the medium to communicate a sense of memory, ephemerality, and loss. Based primarily on forms from the now lost landscape of my childhood, the clay objects I create may be unfired and preserved in wax, or fired with raw or unexpected surfaces. I present these objects as physical tributes to a memory, marking both a landscape that I have experienced that no longer exists, and the actual tangible process of object making. These clay objects are then placed with forms made of materials that currently inhabit and fill this now suburban landscape.

The resulting works are entities that are symbiotic yet impossible, balancing what can be seen now, what was seen before, and perhaps what may be seen in the future. These works speak of the human idea and need of home, and the necessary yet chaotic change that rural and suburban landscapes constantly undergo. They are meant to leave viewers questioning, perhaps considering the role they play in the landscapes that surround them.

Born into the fifth generation of a farming family in Southern California, Marianne McGrath received a BA in Ceramics and Biology from the University of Colorado at Boulder in 2001. After graduation she was a post-baccalaureate Access Student in Ceramics at CU Boulder, and was a co-founder of Gallery Sovereign — Boulder’s first gallery focusing on the work of emerging and underrepresented artists. She remained as the lead coordinator and curator for the non-profit until she moved to Austin, TX in 2004. In 2007, she received an MFA in Studio Art from the University of Texas at Austin. From 2008-2014, Marianne was an Associate Professor of Art and the Head of the Sculpture and Ceramics Programs at Temple College, outside of Austin. From 2011-2014 she served on the founding Executive Board of Directors for the Texas Sculpture Group — one of three branches of the International Sculpture Center; was a Curator and Coordinator for NCECA’s Projects Space Exhibition; and exhibited widely throughout the western US and Canada. In 2014, she relocated back to her childhood home of Ventura County, CA. In 2017, Marianne became an Assistant Professor of Art and Head of Ceramics in the Art Program at California State University Channel Islands, and resumed her role with NCECA’s Projects Space. She maintains a studio and lives with her husband and daughter in Ventura, CA.