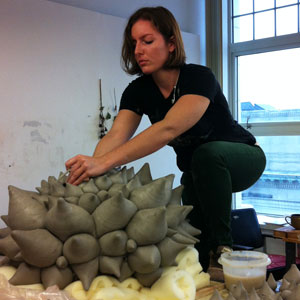 There is an interconnected quality that organisms and the environment have with one another, and these symbiotic relationships can lead to creation, mutation, or destruction. I create abstracted biological sculptures that embody the natural world and the way I empathize with it. Each piece is created out of many individual hand-built and wheel thrown elements that are assembled to evoke emotion through their gesture. I use movement as referenced from existing organisms to create sculptures that read as though they might be cringing, reaching out to grab, leaning as though pushed, or are reacting to injury. My forms are fictitious biological organisms that I utilize to express various scenarios of change, and what they might lead to.

Meaghan Gates was born and raised in Northern California and received her Masters of Fine Arts Degree at University of Massachusetts, Dartmouth as a Distinguished Art Fellow in the field of ceramics. At the completion of her undergraduate degree from California State University, Chico, she worked at the Guldgargaard International Ceramic Research Center in Denmark as an assistant and resident artist. She was also the recipient of a Windgate Fellowship that allowed her to work with a production potter in Seto, Japan and participate in residencies in Japan and China. Her work has been shown in solo and group exhibitions across the United States and internationally. Along with her artistic work, she has aided in the creation of a ceramic-based curriculum that has been used by the Ammachi Labs at Amrita Vishwa Vidyapeetham (Amrita University) in Kerala, India. She currently teaches ceramics at the University of West Florida while maintaining her studio practice.