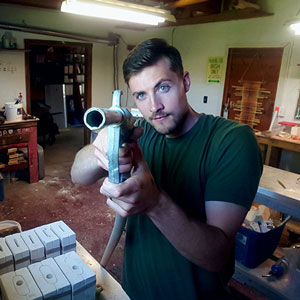 Our innate ability to review our faults in order to prevent future mistakes is invaluable, yet so often these former follies are disregarded. With my work I explore my personal connection with the physical and social world in which I exist. I employ imagery from the past in order to form an understanding of the present, combining elements that assume both the rise and fall of hierarchies within a society. The sense of an impending societal collapse is produced by the satirical decal imagery often depicting peoples, animals, or resources that were destroyed in our path of consumption; exemplifying the lack of understanding from our past mistakes.

There is the moral of all human tales:

'Tis but the same rehearsal of the past,

First Freedom, and then Glory—when that fails,

And History, with all her volumes vast, Hath but ONE page.

Mitchell Spain was born and raised near Des Moines, IA. He received his BFA in Ceramics in 2012 from the University of Iowa and his MFA at the University of Kansas in 2015. Mitchell has exhibited in many national and international exhibitions, including the Zanesville Prize for Contemporary Ceramics. He has been featured multiple times in Ceramics Monthly, and an article he authored on his research of ceramic threading was published in the November 2014 issue of Ceramics: TECHNICAL magazine. He currently lives south of Des Moines, Iowa working as a full time studio artist.