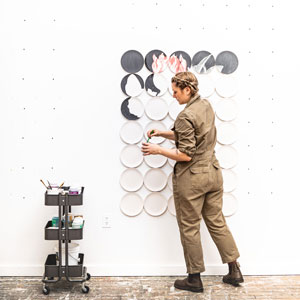 Molly Hatch is an artist designer with a formal education in drawing, painting, printmaking and ceramics at the School of the Museum of Fine Arts at Tufts University, receiving her BFA in 2000. In 2008, after several ceramic residencies and apprenticeships in the United States and abroad, Hatch received her MFA in Ceramics from the University of Colorado, Boulder. In 2009, Hatch’s career took off after she was awarded the prestigious Arts/Industry Residency in the Kohler Pottery at the John Michael Kohler Arts Center in Wisconsin. In 2013, Hatch had her first solo museum exhibition at the Philadelphia Art Alliance and was included in New Blue and White, a contemporary decorative arts exhibition at the Museum of Fine Arts in Boston. In 2014, Physic Garden, Hatch’s first monumental 456-plate work inspired by the museum’s collection of English Ceramics, was permanently installed at the High Museum of Art in Atlanta as well as a second monumental wall piece titled Caughley Landscape, another installation commissioned by the museum and the Woodruff Arts Center in Atlanta for their permanent collection. In 2016, the Clayarch Gimhae Museum in Korea exhibited a selection of wall installations by Hatch as a part of a larger ceramics invitational titled Post-Tile. Chronicle Books published Hatch’s first illustrated book of paintings in March of 2015 and September Publishing printed Hatch’s second major book of paintings and historic research titled, A Passion for China in October 2017. In 2017 Hatch installed her largest museum commission to date at the Newark Museum in Newark, NJ. Commissioned by Chief Curator Ulysses Dietz, Hatch designed and executed a triptych of almost 600 plates for a wall installation for permanent installation titled Repertoire. To design and complete this monumental commission, Hatch worked with curators across three departments in the museum collections: African, Asian and American. Hatch lives and works in Florence, Massachusetts.