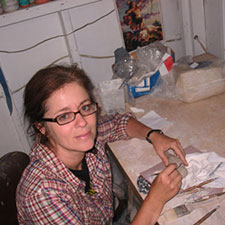 My work consists of hand-built ceramic sculpture, narrative tableaux, and wall pieces. Generally, it deals with the human inability to comprehend or express our own mortality and connection to the natural world, and plays upon our separation and alienation from these natural and immutable processes. Visual influences range between the natural world, the surreal, the saccharine world of Walt Disney, and the melodramatic scenes depicted on taqueria calendars.

My relationship to clay as a sculptural medium is not invested in traditional concerns about history or process. I have always responded to clay as an almost characterless but intrinsically responsive and visceral material with limitless potential for manipulation.

Still Lifes – This body of work is inspired by the genre of still life painting (functioning traditionally as a reminder of mortality) and particularly by the compositions of Chardin. Simplified but realistic representations of game animals are forcefully combined and contrasted with cartoonishly glazed and artificially bright and vibrant elements (dripping oranges, bright yellow canaries, flowing drips). The glazed elements are generally pushed into the wet clay of the larger sculpture, and the entire sculpture is dried, fired, and re-fired together, resulting in many cracks and stresses. This process and the whole jarring composition are meant to correlate with the complexity and strain of our attempt to understand our mortality in its entirety.

Monkeys – Sinister primates make the case for coming to terms with our own baser instincts, while simultaneously aspiring to some higher plane of existence. Part hero and part villain, engaged in often ambiguous and always suspicious undertakings, the monkeys describe the limits of evolution and magnify our own struggles to define our humanity.

Ghosts – The ghosts represents another way of addressing the struggle to come to terms with our mortality and the the lack or existence of a spiritual dimension. In a childish solution, the figures simply dress themselves up like ghosts with sheets over their heads. Their efforts are as futile as my own attempts to sculpt something amorphous and immaterial from a material as heavy and permanent as clay.