Natalia Khlebtsevich - "Between the lines"
2013, 7 wall panels. 35 × 50 × 0.5 cm. each, Media: Mixed Media, Non-clay, Porcelain, Firing Process: Electric, Surface: Glazed, Overglaze Enameling
The image contains a fragment of an installation with the use of porcelain, unbaked overglaze painting, which cockroaches eat during the exhibition

Natalia Khlebtsevich - "Between the lines"
2013, 7 wall panels. 35 × 50 × 0.5 cm. each, Media: Mixed Media, Non-clay, Porcelain, Firing Process: Electric, Surface: Glazed, Overglaze Enameling
The image contains a fragment of an installation with the use of porcelain, unbaked overglaze painting, which cockroaches eat during the exhibition 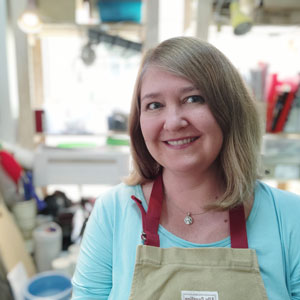 Coming of age, I became passionate about two seemingly unrelated vocations – biology and sculpture. When I came to realize that ceramics was able to join the living and the inanimate for its implicit nature of being both organic and inorganic, I began to make works combining ceramics and various natural objects. In my sculptures I recurrently find myself contemplating about the Time as the most inscrutable factor of human life. Often, life and death are concurrently present in real time in my works. The narrative matters to me equally as the formal shaping of my work.

I am from Russia, where ceramics has been considered a second-class discipline among the arts, consigned to functional craftsmanship. But I never felt that ceramics is only about jugs. I always believed the clay as a material was destined to express serious thoughts.

I love ceramics, I feel empathy to it, I appreciate its potential to express a wide range of human thoughts and feelings, that’s why I don’t have one main material or technique.

As an artist in ceramics, I am attracted by the possibility of combining an incompatible, using contrast of materials, juxtaposing the fine and coarse, durable and fragile, living and petrified. I work in various techniques with chamotte, porcelain. In my objects and installations, I use the combination of raw and fired ceramics, sometimes include other substances and even living organisms. Ceramics, as a medium, by virtue of its diversity allows me to embody almost any idea, and firing with its inherent unpredictability brings an external spontaneity that I welcome as a blessing from nature.

Natalia Khlebtsevich was born 1971 in Moscow. Enrolled in 1991 in Stroganov Moscow State University of Industrial and Applied Arts, she studied ceramics and later art history during her postgraduate years in the same school. She stayed with Stroganov school and still work there as a Professor, teaching ceramic art and technology, while working creatively on her own projects. She is a Member of the Moscow Union of Artists and International Academy of Ceramics IAC. Since 1993 constantly participated in Russian and International exhibitions and authored a number of articles on studio ceramics. Laureate of the Moscow Union of Artists Award “Youth 2004”. In 2009 and 2011 nominated for Kandinsky Price. Participated in Moscow Art Biennale 2013, 2017; International Ceramic Biennale 2014 Vallauris, France, 1st and 2nd Latvia International Biennale 20016 and 20018, 11th International Ceramics Competition, Mino, Japan, 2017. Her work can be found in collections of Yelagin Museum of Decorative Art, Saint Petersburg, Moscow Museum of Decorative, Applied and Folk Art and private collections in Russia and abroad.