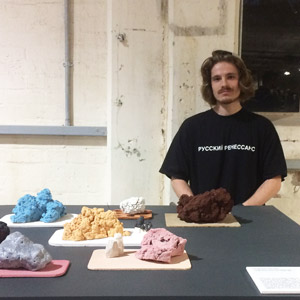 Opposed to a direct evocation to form and texture, my work could be described as ambiguous, almost fictitious in its contrived representation of geological landforms. Rooted in glaze experimentation and manipulation my work is ingrained in material sensibility and utopic romanticisms; perhaps delusions of the ‘perfect’ glazed specimen. The process itself is a rigorous battle to achieve material textures that represent my immaterial and material memories. These memories conjure themselves as animated representations of volcanos and meteorites juxtaposed against sensuous experiences exploring my dads building sites and the objects that dominate that space. As memory itself is a consistent recollection of past experiences, what we know of the past can never be true and thus like Chinese whispers these material representations become distorted in their configuration.

I began my artistic venture studying Fine art at Cardiff school of art and design, Cardiff wales 2013 – 2016 then moved on to my master’s degree in ceramics 2017. During this time my artistic practice really began to develop, change and evolve drastically within the last few years more so during my time on the Masters. Although I would argue my relationship with art, in particular sculpture began at a very early age from a wild and vibrant childhood imagination. Living not too far from a huge woodland area in the forest of dean and not too far from the south west English coast side my childhood was mainly spent outside rolling, running and playing in the mud, rummaging around the forest and coast side for fossils and rocks. These aesthetic factors You could argue were my first inter engagement with clay of sorts. From these childhood memories and imaginations my ceramic body of work has manifested and taken over. “Rocks, dinosaurs, space, lava, aliens ” I am not totally sure why I am drawn to these things so much, yet I would argue they are the basic underlying interests within my artistic practice. As I have grown up I have researched these topics more and more, my body being a reflection of these explorations in miniature.