Nicholas Wedell - "Nicholas Weddell, “Dungeon Prize (for your eyes only)”" 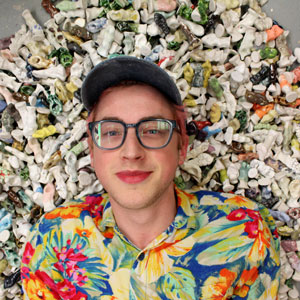 My work revolts against the borders of what is possible with ceramic material. I study and discover what is feasibly fusible and push against it, resulting in a marriage of surface, form, and color that defies expectation and familiarity. Through tactile gestures in clay wedded to polychrome surfaces that grow and evolve, I explore forms that brandish their ambiguity with a cavalier confidence and proudly wear their glazes the way a coral reef advertises itself to tropical fish. Chromatic communication acts as muscle and skin layered upon a porcelain skeleton, the delicious body is then fired and rendered chemically inert; ready to enter the world as a courier to deliver a message encouraging the awareness of joy, the celebration of the mundane, and the questioning of things concrete.

Symphonies of silica, molten, merging with copper carbonate to form a feast of green glory. Dressed in the sour lemon of vanadium with a bowtie of raspberry cobalt blue all topped in copper maraschino. Gravity performs as the commander, dictating flow and gush. Hot glass harkens but betrays its master upon cooling: an allure forever unfulfilled. The primal feelings that originate in my stomach act as my rudder, navigating me and my work towards the provocative, the strange, and the alien. I utilize utility as a vehicle to transport my work into personal spaces and places, employing familiarity as a tool to smuggle the strange past the borders of the gallery and into reality. Through my research I have found that there is no hard line between clay and glaze, pottery and sculpture, and surface and form. I am currently exploring the spectrum between these subjects and along the way am making work that floats between these concrete and defining characteristics. I am jolted by the possibility of a pot that is a sculpture, clay that is glaze, and surface that is form.

Originally from Austin, Texas, Nicholas Weddell received a BFA in Ceramics from Texas State University in 2016 and currently resides in Western New York where he is in his second year of graduate school at the New York State College of Ceramics at Alfred University. Weddell’s work is the fantasy of physical reality, rooted in the language of pottery, vessel, and landscape. He taps into the familiarity of these subjects-be it cups, trees, or materials-in order to catalyze a celebration of that which is and a challenge to seek that which could be. Weddell’s work is an arbiter of progress, a wrecking ball of convention, and above all a harbinger of joy. He has shown work at Lefebvre et Fils in Paris, France, The Nevica Project in Chicago, Illinois, and most recently had a show at Eutectic Gallery in Portland, Oregon. Weddell’s work is also part of numerous private collections around the world.