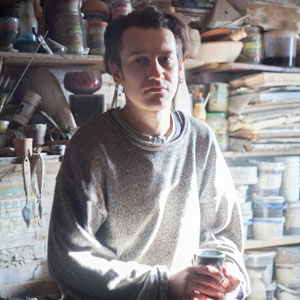 I began studying pottery in 2003 and my first wish was to create functional wares. I was inspired by Japanese ceramic art and I tried to express the processes of nature in clay. Issues that interested me were the transience of life, imperfection, impermanence , nature of the self, and the beauty of materials. But my philosophy transformed, and I began to reflect on human beings and about processes in society: Civilization and urbanity as capable of changing human nature; Personality as a set of separate elements and how they may be changed and permanently transformed; Continuous change and imperfection as a base line of personality making any seeming order unstable; Entropy as a mode of transforming the objects of material culture; and psychological isolation as common to human experience. I try to integrate these ideas as motifs into my work.

In the midst of my sculptural work I continue to make pottery because for me it is the study of form, surface, color, science, and technology. It remains a great experience to have the possibility to make functional things.

Oleksandr Miroshnychenko lives and works at his studio in Kochetok, a small village in the Kharkiv region of Ukraine. In 2001, he decided to become an artist after one year of studying radio physics in Karazin Kharkiv National University. Miroshnychenko subsequently enrolled at Kharkiv Artist College but after two years of education was expelled. The aspiring artist’s first meeting with ceramics took place at the ceramic studio of Kharkiv State Academy in 2003. There he started working as an assistant, preparing materials for students and helping them to make their works. The head of the studio, instructor Volodimir Shapovalov, taught Miroshnychenko the technology and art of ceramics and clay. Miroshnychenko worked at the studio for seven years and during that time he studied ceramics and pottery intensively. The artist earned his bachelor’s degree and master’s degree through correspondence courses at Kharkiv state academy of Design and Arts.