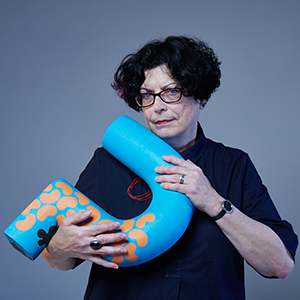 As a sculptor I love working with the directness of clay, using all the techniques, coiling and slab building, making one-off pieces, which are fired, constructed, then finished with acrylic paint. My obsession is with catching a very simple form or line, then enhancing it with colour. Sometimes these stand alone, or are in combinations that I hope suggest opposites such as strength and fragility, stability and precariousness – very much reflecting the relationships we have as human beings. But also rest and activity, grace and motion – always attempting to give an inert object a lively, almost living, presence and a sense of strong individual character.

What excites me is the abstraction rather than trying to create a piece that represents or illustrates an idea. Really, working in clay is like play, and, being dyslexic, I have trouble expressing ideas in words, so I chose a medium where words aren’t necessary. Or, you could say, it chose me.

I put one colour against the other in a way that is satisfying or dynamic. It’s purely visual and non-intellectual. If there is a deeper meaning I like to think that is brought by the viewer: I don’t like to limit their experience by giving a sculpture a set explanation or description. Sometimes I know what is going on in my head, but more often I let my hands do the “thinking”. That doesn’t mean it’s easy – far from it, because I take a very long time to consider the exact colours and weigh them up. Some might watch my activity and indecision and quite honestly think it’s the total obsessiveness of a mad person.

I like the thought that the pieces look light, and float – a contradiction to the obvious physical weight of clay. I like the idea of uplift. I’m adamant they should be viewed at eye level, by walking around and looking at them from different angles. The surface texture can work to make the flatness of colour more nuanced and less machine-manufactured looking, adding a natural edginess on a vivid unnatural blue, for instance. I always work on a series of pieces at the same time because of the nature of the material (you cannot rush it), but the finished product is defined by the time it is modelled which can be affected by all sorts of things: weather, temperature, my mood, and so on. If you pushed me to say, I would like the combination of non-figurative form and colour combination to set off a series of ideas in the viewer’s mind – tranquility, elegance, power, sadness, rest, action, conflict, a sense of movement… all these things triggering human emotions of some kind

Patricia Volk, a Royal West of England Academician (RWA) and a Fellow of the Royal Society of Sculptors (FRSS), was born in Belfast, Northern Ireland, and has a studio in Farleigh Hungerford, Somerset. Her work has been exhibited nationally and internationally, including at Buekenholf-Phoenix Gallery in Belgium, Chichester Cathedral and the Royal West of England Academy, also appearing in the collections of Swindon Museum & Art Gallery, Lord Carrington, Simon Relph CBE, the British Consul (Ivory Coast) and Mary Portas. She was Regional Winner of the ING “Discerning Eye” prize in 2007 and has been shortlisted for the prestigious Brian Mercer Residency. One of her pieces was also selected as a Southern Arts prize.In 2017 Patricia was invited by the Trustees of the Designer Crafts Foundation to go to Israel to be one of their guest sculptors. This involved attending & speaking at the symposium in Tel Hai, lecturing in Jerusalem at the Israel Museum and at the Bet Benyamini Centre in Tel Aviv. In 2018 she was Commissioned to create a new on-screen ident for ITV (UK Independent TV Network) as part of the prestigious ‘ITV Creates’ project.