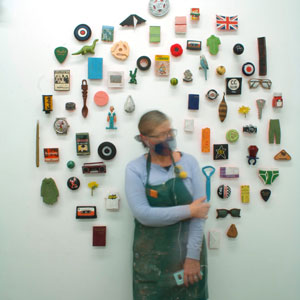 My work can be separated into three main types: figures/tableaux; objects/collections and pottery. These three categories, although visually distinct, are for me linked by a connection in each to narrative. Accounts from a parent, a teacher, a movie, or a dream—fragments exaggerated or diminished twisted together in an order that corresponds with the flux of how things are remembered.

Pattie Chalmers grew up and went to art school in Winnipeg, Canada. She received her BFA in printmaking from the University of Manitoba in 1994, and her MFA in ceramics from the University of Minnesota in 2001. Since graduating she has exhibited in group exhibitions on five continents, in six countries and in thirty-four states. She has had five solo exhibitions in the past ten years, most recently the exhibition “Every Thing and More” at the Craft Alliance in St. Louis.

Chalmers has taught at the University of Minnesota, Ohio University and at Southern Illinois University in Carbondale where she is currently a Full Professor.

(Chalmers might be a little compulsive, and she definitely likes to laugh at her own jokes).