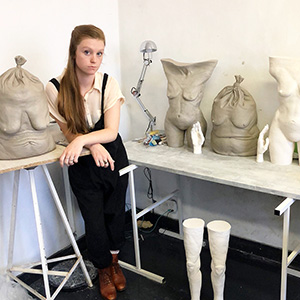 The body as an object -- deconstructed, fetishized, weathered, worn, parsed, reconstructed -- is a living document. Our experiences are drilled into our skin. Our memories are visceral and sensual. Our DNA holds our history and often immutable limitations. I’m fascinated by the bodies we all carry, especially those marginalized by our society; the women I come from; and my own body. I’m interested in how society views women over a lifetime from childhood to fertility to infertility. I’m attracted to the tensile girding of muscle, the skin as both taut and loose, and the underpinning of bone that is most clearly revealed by the aging body. At a young age, I imprinted on the human life cycle, and how vulnerable we are no matter how indomitable we seem. I was raised by storytellers. An important story of my family’s survival is that my great grandmother -- with whom I was close as a child -- was raised in a house of prostitution during the Great Depression; her mother was the madam. At a young age, I thought of the body as a commodity. With clay, I’m able to edit and shape the narrative. I push against the concept of the ideal body as it is shown in sculpture through history and throughout a lifetime, especially given that, in our culture, the ideal body seems to be the only one that is truly authorized. Even for the ideal female body, that authorization comes from those in power, rarely from the woman herself. Truncation is a theme in my work; this too might come from family stories. My great grandfather was a double amputee from World War II. Truncation in art raises questions -- what does society want to see; what does it hide and excise; how does truncation reveal how women's bodies are discussed in parts and pieces? The interpretation can be seen as what’s lost, what’s there but unseen, or as what’s been taken. The lens can be our culture’s or the woman’s own -- what she does or doesn’t want to be seen or exposed. We are living in a world that has always had a class system, a society that loves some bodies and devalues others. We are people who all possess biases. There are huge disparities in terms of privilege when it comes to race, gender identity, nationality, sexual orientation, and ability. I am struck by the idea that the body that you are born into predetermines how you will move through the world and be treated. My personal experience, which is that of a privileged white woman, made me aware of the confines and strictures that American culture places on even the privileged female body. I create portraits of the body that reflect the world as it rises up around each of us, and each body is a commentary on the world that surrounds it.

Phoebe Scott is a figurative sculptor who is currently an MFA candidate at Indian University. Having received her BFA in Sculpture from Massachusetts College of Art and Design in Boston, Phoebe Scott has assisted on projects with HandsHouse Studio, including a research trip to Greece. She studied drawing and painting in Florence, Italy, and has studied under Christina Mastrangelo at Wethersfield Academy for the Arts. She has been a resident artist at c.r.e.t.a. Rome, as well as A.I.R. Vallauris in the South of France. Her most recent residency being completed at the Worcester Center for Crafts.