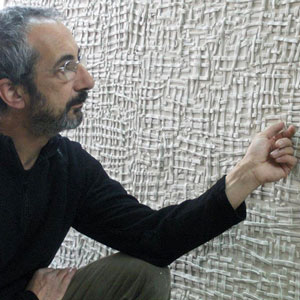 My way of working is based on a “open eyes” and “looking first” approach. Or better, it is a sensation I try to transfer to my works. And I consider my works good when I open the kiln and, not recognizing the pieces as mine, get surprised. With this process I accumulate in my studio hundreds of tests and objects that fill floors and stairs as they wait for the moments when I will take up that technique again. Consequently, I use great number of materials in satisfying my obsession with “testing.” Generally, I work my sculptures with clays I prepare myself and fire at 1150c in a single firing. Lately I work with two clays: One of them expands and the other one (a low-fire porcelain) is inert. With these materials there is a radical difference between the works before and after firing. I try to keep a balanced relationship with the fire. Of course, the fire has to work by its own, as I do, but in the end we are a team.

Rafael “Rafa” Pérez was born in Haro, La Rioja, Spain in 1957. He originally studied economics but later decided to be an artist and has maintained this career since. He has held numerous exhibitions and won numerous awards internationally. In 2007, he was elected to the International Academy of Ceramics. He currently lives in a small Spanish city famous for its wine and recently became a grandfather.