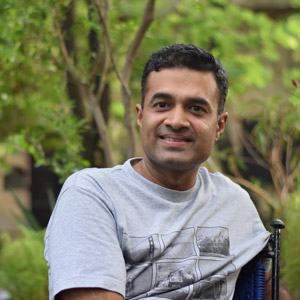 Initially, my perception of ‘challenge’ for a potter was to make a vessel comfortable to use – a bowl to eat out of, a cup to drink from and a tea pot that pours well. This philosophy of making pottery has been highly influenced by the traditional Indian concept - to produce pots that have a function. Gradually, as I focused more on the form and character of the pot, utility and function took a back seat. My pots, though still vessels, became more sculptural. I like to ‘reinvent’ things from nature in my own visual language. I like to balance between wheel throwing and slab construction. Developing these two methods simultaneously allows a fresh creative approach, which promotes exhibiting the contrast of the medium – wheel thrown pots representing symmetry, rigidity, and hand built components showing the organic, fluid nature of the clay. I also attempt to convey the qualities of clay by allowing the form to speak of its existence through the evidence of artist and medium in collaboration.

Rahul Kumar has been in clay for 23 years. He completed his masters from USA on a Fulbright Scholarship in 2008 and received the Charles Wallace award to study in the UK in 2013. He has had 7 solo shows in the US and India (including with Threshold Art Gallery, Cymroza Art Gallery, Art Heritage, and Apparao Galleries). His works have been auctioned at Sotheby’s London in 2012 and is a three-time recipient of the AIFACS National Award. In 2014 he received the Junior Fellowship for Excellence in the Field of Visual Arts by the Government of India. Published critiques include essays authored by Kishore Singh, Roobina Karode, Aman Nath, and Keshav Malik. He collaborated with Raqs Media Collective for a work that was part their solo show at the NGMA-Delhi. A large scale ceramic installation, funded by India Foundation for the Arts (IFA) was showcased as a special curated project at the India Art Fair 2015 edition. His works are part of prestigious collections in India and abroad, including India Habitat Centre and Kiran Nadar Museum of Art. He was recently named as one of the five-Indian-ceramic-artists-you-need-to-know by the Architecture Digest, the leading international design journal and has been honoured by the Bharat Nirman Foundation for his contributions in the field of art.