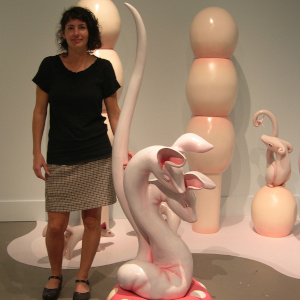 I employ fictional animals in my artwork to explore the narrative of my life and my own personal history as they have the ability to disarm expectations. I enjoy utilizing animals because they are beautiful and mysterious creatures, vulnerable to relations with humans. This susceptibility gives them a sense of benevolence that is often lacking in human interactions. I use this vulnerability as a source of power. It takes a brave and confident person or animal to make themselves vulnerable, for they must have the strength to withstand the consequences.

The narratives are purposefully ambiguous as there are many ways to interpret a single piece. Some pieces look cute, sweet and innocent, but upon closer inspection, one realizes that the piece is conceptually more complicated. They may be read simultaneously as happy-go-lucky as well as melancholic and out of place. I blend the beautiful with the sad, fantasy with reality, idealism with truth as well as the sexual with the innocent. I decidedly leave these compelling dualities open for the viewer to draw their own conclusions.

The fictional creatures juxtaposed with non-fictional animals are there to turn the world up-side-down and to leave the viewer off balance. By changing the rules of engagement, anything is possible in the world I create. Fantasies become realities and dreams become actuality. Concrete gender roles no longer exist. Females can be more like males and males can be more like females.

As a female artist, I am interested in gender and how specific gender roles are assigned to both girls and women. I exploit normative female iconography such as flowers, butterflies, and curving-sensuous lines as well as “feminine” color combinations such as pinks and purples. I embrace female sexuality, vulnerability and romance not as the stereotypical taboo, but as an empowered re-contextualization. Through these creatures, I embrace and reclaim female stereotypes, powerful messages relevant to today’s world.

Rebekah Bogard received her MFA from the University of Nevada Las Vegas in 2003. She received a BFA from the University of Wyoming in Laramie in 2000. She is currently Chair of the Art Department and Associate Professor in Ceramics at University of Nevada Reno. She has received numerous awards including being named an “Emerging Artist” by both the National Council on Education for the Ceramic Arts and Ceramics Monthly Magazine. She has been awarded a residency at the Bemis Center for Contemporary Arts. In addition she is a two-time recipient of the Nevada Fine Arts Council Fellowship, as well as receiving the “Best of Show” in several national art competitions. Her work has shown in several solo and group exhibitions nation wide. Moreover, her work has been reviewed in publications such as Art in America, LA Times, Sculpture Magazine, Artweek, Ceramics Monthly Magazine, and Clay Times Magazine.