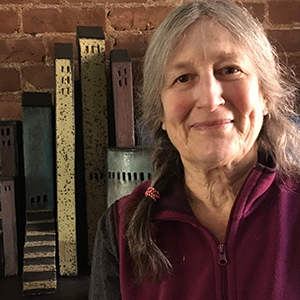 I have been making clay vessels for over 50 years. In the beginning these vessels held things. Gradually they became hollow sculptures whose only function was to interest and delight the viewer. But they had to interest and delight me, too. These sculptures had to reflect my love of architecture. So I drew on inspirations from buildings and building parts from all over the world: the soaring towers and arches of Italy, the church spires of Barcelona, the factory smoke stacks of Brooklyn, and the staircases of the world. Working with slabs of clay, glazes, slips, and epoxy paste, this architectural stew grew into my own sculptural fantasy world.

In my Junior year at the University of Michigan, I was introduced to pottery. It was love at first sight. After graduating with a Masters Degree in Ceramics, I worked at Clay Art Center in Port Chester, NY for 8 years. It was there that I decided to become a full time studio potter. In 1971, I left to begin working at my own studio in Brooklyn, NY. I bought an industrial building in the Gowanus area and have been there for almost 50 years.I show and sell directly from my studio as well as exhibiting at numerous galleries around the country. I have ceramic pieces in the permanent collection of the Detroit Institute of Art in Detroit, MI, and The Everson Museum of Art in Syracuse, NY. Most recently, two sculptures were purchased by the museum, “Sculptureum” in Auckland, NZ.I have taught at University of Michigan, Pratt Institute of Art, and Kingsborough Community College, and have given workshops in Ohio and New York. My work has appeared and been written about in a number of art and ceramic magazines. I have also collaborated on a video of an interesting inlay technique that I have perfected. The video can be seen on my website.As the 2017 Pioneer Honoree of the Brooklyn Clay Tour, I was given an award of 500 lbs. of clay. With most of that (porcelain) clay I created a series of architectural ‘Sand Castles.’ Some of these ‘Sand Castles’ have been on view at Guilford Art Center in Guilford, CT as well as at SOFA Chicago.