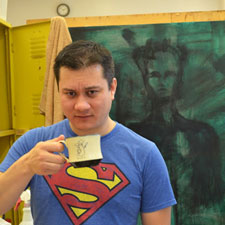 Rob Kolhouse recieved his BFA from Indiana University, and in 2014 his MFA from the University of Florida. Heavily influenced by Donna Haraway’s Cyborg Manifesto and the cyberpunk classic Ghost in the Shell, his is figure sculptures investigate constructed gender using the cyborg. In addition to his sculpture he produces a line of vessels with irreverent characters on them. Currently he is faculty at Old Dominion University in Norfolk, Virginia.