Robert Bucek - "a bed"
2020, 250x107x22, Media: Wild Clay/Raw Clay, Firing Process: Wood fired, Surface: Unglazed
All the tiles were collected from a roof of an old house, which was condemned to demolition. Its smashed and shattered roof becomes rearranged and pieced back together to a symbolic bed – a site of rest, birth or death. Bed that incorporates the most intimate moments of life and presents a sort of tiny dwelling in the midst of a house.

Robert Bucek - "janiszów"
2020, 300x300x3, Media: Wild Clay/Raw Clay, Firing Process: Unfired, Surface: Non-ceramic
"Janiszów" is an installation mediating the process of spontaneous creation of a plastic drawing emerging with the drying of drifting mud, which happens right during exhibition. Drifted red ferrous mud is organized into 36 glass frames measuring 50x50cm, which are further composed into a square net with an edge of 3m. The goal is to bring the natural process itself into the gallery space. The viewer can repeatedly visit the gallery to see individual states of ongoing change.

Robert Bucek - "mikoszewo"
2020, 480x480x50, Media: Non-clay
The installation "Mikoszewo" is a dense relief created by spontaneous settling of driftwood on the sea bank in the Visla river delta. The process of collecting and carrying individual pieces of wood is essential for the installation. In the course of collecting, the artist used 96 vegetable boxes measuring 60x40x20cm, which are arranged into a square with an edge of 4,8m. These boxes are typical of the Gdansk region and thus inevitably became part of the work. 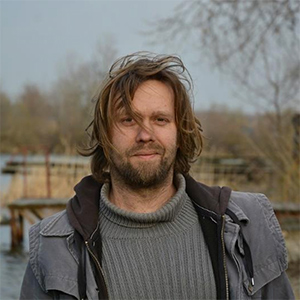 "A Story" in the broad sense of the word is the point in Robert Buček ´s work. The story may be experienced, seen, literary or mythical. Sometimes there is a feeling of a given situation and that feeling evokes another, inner feelings consequently. Through the materialization of those feelings Robert Buček contemplates their contents and then either identifies with them or takes a stand on the issue.