Ryan Labar - "Unsafe At Any Dose"

Ryan Labar - "Made In China"

Ryan Labar - "Title to be determined #6"

Ryan Labar - "Darkness on the Edge of the Universe" 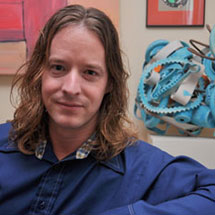 Working with clay, I fabricate individual and wheel thrown elements. These, together with other clay parts, are carefully stacked on top of each other to compose a layered and woven structure. Each element counterbalances the position of another. These precarious constructs are placed in a kiln, and the heat of the kiln melts and moves the clay and glaze. The clay parts deform as the material softens. Tensions are released, causing the system to undergo a domino effect best described as a cascading failure where the failure of one part triggers the failure of successive parts. As the firing progresses, the movement quiets and the system of parts reach equilibrium and become a singular and rested whole.

The final composition reflects the motion and revealed tension of the integrated clay parts. The deformed elements of the system appear suspended in space or compressed by the weight of another. Cool blue celadon bands twist around soft white porcelain rings as brown stoneware rods, once rigid, bend and weave their way throughout.

The piece is a dynamic whole of singular elements. The combined movement of the neighboring parts has affected each singular part. The structural rods, bands, rings, and cogs change from being a physical structure of support to a visual illusion of structure. The parts have mixed to become one. A transformation has occurred. Each component’s rigid and singular identity has changed, warped, and bent to accommodate the integration of the neighboring elements.

These systems are studies in causality. I view the system before and after the firing and develop a set of deterministic means that affected the final system. Each piece’s effects inform the next piece's cause.

The integrated forms are complex mixtures, busy and balanced at times. Others seem piled and chaotic. These systems are metaphors for our times, our bodies, and our philosophies. Time ages all things. It softens hard edges and moves material to alternative states of rest. Not only does time test form, it tests ideas.

Some become foundations for future breakthroughs as others fall into oblivion. My process is the concept. My ideas are subject to the same cascading failure as are my forms.

Ryan LaBar grew up in Great Falls Montana. He received a degree in Biology and Art from Gonzaga University in Spokane Washington. In 1999 he moved to Helena Montana and set up a studio. He has worked as a resident artist at the Archie Bray Foundation, the LH Project, California State University Long Beach, Caldera, including international residencies in China, Bali, Poland and Denmark. He has spent time at the Kohler factory in Wisconsin and Meissen Manufaktur in Germany. Ryan received his MFA at the University of Nebraska Lincoln and was the topic of Nebraska Television’s Nebraska Story. Currently, Ryan is the program director of the LH Project, a prestigious residency program in Joseph Oregon.