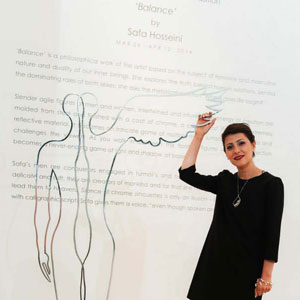 Through my sculptural pieces different materials such as bronze, ceramics and iron produce a complex visual language. Ceramics though, provides more capabilities to achieve the maximum level of expression through its form and pliability. I work with different subject matters to convey variety of ideas. In the series The Entrance, a torso of a female store mannequin has been slip-casted to produce a series of artworks. Here my role as a female ceramic sculptor is to address a very critical aspect, the objectification of women’s bodies. I do this while also exploring the female form, creating a dichotomy of the freedom of a woman’s body and yet the objectification of it.

In another work I referenced the Persian idiom “ meslet khar dar gel gir kardan” which literally means “like mule stuck in mud.” In this instance I refer to hybridity as a struggle that one cannot get out of to insinuate that the world is not a place for acceptance or argument.

I created an installation in a large room with the images of a male donkey on one side and an image of female horse on the other. The wall in between had a repeating pattern of mule images, which is the offspring of that mix. Horses and donkeys are different species with an unlike number of chromosomes. While a mule is an example of hybrid vigor, they are neither a horse nor a donkey, and they are sterile. In this I am criticizing the current place and situation of the helpless pluralism of contemporary art. To quote Buddha, “All composed elements are condemned to decline,” and the existing art scene is no exception.

Safa Hosseini was born in 1980 in Tehran. She received her bachelor’s degree in 2004, and her master’s degree in painting in 2006 from the University of Tehran in Iran. Safa held her first solo exhibition at the Seyhoun art Gallery in 2006 which was focused on the representation of the intricate forms of human body to embrace the freedom and liberation of the expression in her art. Since that time, she has participated in six solo exhibitions and more than 20 group exhibitions nationally and internationally. She has received second place in the 5th Biennale Richard & Pam Salmon Sculpture Competition in the United States. She has over 15 public art projects, which have been displayed, in different locations in Tehran and other cities in Iran.