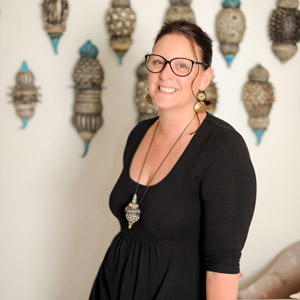 My sculptural works are often on the edge, balanced, uneasy and restless, contrasting with a delicate prettiness that presents a sense of determination. They reference the illusions we create through media, how we present ourselves and what we determine as truth. Our outer shell is a façade, a beautiful illusion, but who we are is unclear. Our very existence is constructed, carefully controlled, meticulously edited. Only the edited version is apparent. What lies within or beyond the beautiful façade is lost, as reality teeters on the edge. Never before has a society become so obsessed with itself. Who are we really? This imbalance between what is real and what is not, is unnerving, and my ceramic sculptures explore this concept.

These works use frilled skirts to create a sense of unease as they physically balance on the edge. They are bold and busy, yet they appear delicate. What lies within is unseen. The very nature of ceramics is brittle and easily broken and the way it is constructed lends itself to the idea of an interior space. Yet these works remain strong, steadfast to uphold the flamboyant outer shell, uphold the illusion.

The shape and form of my work are inspired by marine animals and microscopic imagery. I am fascinated by texture and have an obsession with repetitive pattern and contrast. The titles of my works are inspired by tags and captions used by social media influencers.

Sally Walk has been working in clay for more than 30 years and she creates sculptural work in stoneware and porcelain clays. She was selected as a resident artist at AIR Vallauris in France and the Seto Cultural Exchange in Japan. She has attended Ceramics Symposiums and Conferences in China, India, New Zealand and South Korea. Sally was selected to exhibit at the Tokyo Art Fair in Japan, Art Melbourne in Australia and the Florence Biennale in Italy where she was awarded the ‘Lorenzo il Magnifico’ first prize for ceramics. She has exhibited her work all over the world in over 30 group and 5 solo exhibitions and is represented in numerous collections. In 2018 she will exhibit a solo exhibition in New York, USA and and Canberra, Australia.