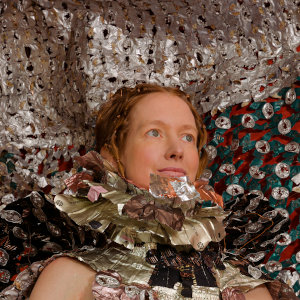 My work deals with the illusion of control: in my point of view, control is an illusion, and through the work, I exercise the acceptance of what everyday and discarded materials reveal, from accidents to new processes. The vital materiality of quotidian objects is my starting point and leads me to a reevaluation of the dichotomy between life/inanimate, human/nature. I believe that a shift in hierarchy can result in a greener approach to self, culture and nature. In the emergence of the unconscious, I am interested in the appearance of primal forms, remnants of timeless myths and ceremonial objects, and in this sense I refer to Joseph Beuys’ shamanic practice: by limiting the presence of consciousness and the censoring ego in the work, I hope to channel an essential poetry. My work is made of impurity, of error, of failure, of frustration, of insubordination, of excessiveness and of organic accumulation.

Sandra Lapage got her MFA from the Maine College of Art in 2013. Sandra has participated in collective and solo exhibitions in Brazil, Europe and the United States, notedly at the Brazilian Embassy in Brussels (2007), at the Ribeirão Preto Art Museum for the 2006 exhibition program, at the Centro Cultural São Paulo in 2012, at the Gowanus Loft (NYC) in 2014 and 2015, at the Blumenau Art Museum and Aura Arte Contemporânea (São Paulo) in 2018, and Museu de Arte de Ribeirão Preto and Andrea Rehder Arte Contemporânea (São Paulo) in 2019. Sandra has resided at various institutions such as the Fondation Château Mercier (Switzerland) and NARS Foundation (NYC) for 6 months in 2014, Elefante Centro Cultural (Brasilia) in 2015, Camac Art Center (France) and Paul Artspace (USA) in 2016, Massachussets Museum of Contemporary Art in 2017 and was awarded an artist residency at Monson Arts in 2019, and will attend ART OMI 2020.Sandra was a visiting artist at the Tyler School of Art (Philadelphia) and Maine College of Art (Portland), United States. In addition to her solo work, she develops a collaborative work in the collective Eclusa and runs, with 9 other artists and designers, the independent art space Vão in São Paulo.