Sarah Gross - "The Street Where You Live"

Sarah Gross - "The Street Where You Live"

Sarah Gross - "The Street Where You Live (detail)" 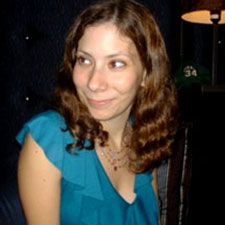 A screen divides space and unites it. Seeing what lies on the other side invites the viewer in, and yet access is forbidden. I seek to activate space by building screens. They act as architecture, as psychological separation, as filter, and distiller. My exploration is rooted in the institution of veiling in Islamic society. I draw connections to the relationship of the sexes in the West as well as the East. I hope to reveal the intersection of eroticism, the sacred, containment, and desire.

I am fascinated with the duality of the screen; it simultaneously conceals and reveals, protects and tantalizes. It consists of matter and space. Using the language and tradition of vessels I build architectural walls and enclosures as well as functional pottery to highlight and clarify the relationships between access and denial, isolation and inclusion. I draw on the reference to the female form as vessel and explore the potential of containment. Pieces may enclose a human form, food, a document, or space.

Constructing and deconstructing, I push the material to its limits, removing as much clay as I can while retaining structural integrity. I am gratified by the transparency of the screen juxtaposed with the mass that has been cut away. After producing a lacy, complex pattern by cutting out a single quatrefoil or trefoil shape I am left with hundreds of cookie-like tiles to play with. I stack the tiles and pave paths with them, surrounding the enclosures from which they originated. This has led me to consider modularity and the connections between architecture and functional pottery.

I inscribe my work with greater personal meaning using text and labor-intensive surface decoration. I write letters and journal into the wet clay before rendering the text inaccessible by cutting through or enclosing it. This becomes an act of confession and absolution. Although I work in both small and large scale my aim remains the same in terms of engaging the viewer through an interactive and intimate experience.

A screen blurs the boundary between public and private, transforming the space, person, or object on the other side. Tension is heightened through separation and visibility. Objects and space become eroticized. By highlighting the fragility and permeability of dividers I question our often self-imposed restrictions of openness, protection and vulnerability.