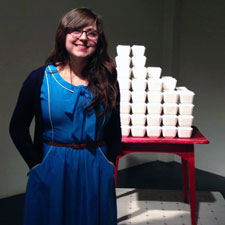 My current work primarily focuses on domestic objects used or made by women in the post World War II kitchen. This work is intended to investigate the dynamic of the women’s role during this era, while also commemorating the societal expectation of being a both a working woman and a caretaker of the home. I do this by utilizing objects that are stereotypical staples of the American kitchen. The objects I choose to employ reflect the "golden age of advertising," with propagandistic imagery geared specifically towards middle-class women during this time period.

With more women entering the work force, products focusing on "quick meals" emerged, claiming to make the woman's life more manageable. Working with references of the Jell-O phenomenon, I intend to explore the dichotomy of the precise nature of the gelatin molds with the seemingly inexpensive ingredients used to make "salads" as family meals. Additionally, I have chosen to replicate quintessential kitchen tools, executed in a way that visually reflects the mid-century aesthetic.

My choice to use porcelain as the primary medium with this work ultimately reflects my desire to conceptually elevate objects that would otherwise be seen as ordinary. My intention is to remove these objects from their original context while also omitting the functionality. I hope this will allow the viewer to embrace the content of the original objects rather than being focused on the idea of using them. Like much of my previous work, I aim to create an environment that will potentially critique socially constructed gender roles, while also questioning how much these constructions have changed over time.

Sarah Tancred grew up in southeastern Ohio. In 2014, Sarah earned her MFA with a Graduate Certificate in Women's and Gender Studies from the University of Montana and prior to that she received a BFA from Bowling Green State University in 2008. She has also completed Artist Residencies at St. Petersburg Clay Company and Red Lodge Clay Center.

This past year, Sarah was an Adjunct Instructor of Art and Art History at Black Hills State University in Spearfish, SD. Currently, Sarah is a Sabbatical Replacement, teaching all levels of Ceramics offered at The University of New Mexico-Gallup in Gallup, NM. She maintains an active studio practice, investigating societal expectations and media representations of women throughout history.