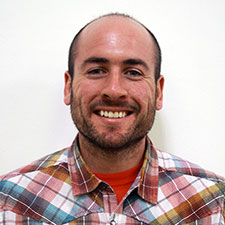 I have always been drawn to investigating the nature of ambiguous objects; objects whose role is unclear; objects that fall between distinct categories, and that exist in what appears to be transitional stages. The pieces I make provoke the imagination by building in experimental self-defined systems that refer to contemporary architecture, as well as comment on the ceramic and non-ceramic process. My pieces vary in form and intention just as the skyline carries changes in form and order. I want to make experimental objects that develop in front of me from the ground up, without a pre-planned result. Using fundamental elements and principles of design I use color, line, negative space, balance and composition to create a sense of tension, playful construction, and mysterious purpose in my work.

I am asking questions about the conventions of ceramics through the use of shapes, surfaces, formats, and processes that come from outside of those conventions. To create, modify and manipulate material is as inherent as eating and breathing. Forever, man has modified conventions through the development and discovery of new processes and techniques. I have followed suit by using a combination of old and new building techniques in my own work. The orderly coils that create my work reflect both rigor and expression as I seek to describe my relationship with these constructions and the freedom I find within the design of an object. My work is, in part, defined by a combination of traditional and industrial ceramic applications as well as non-ceramic processes. Pieces speak to Ceramic tradition through the use of clay, glaze, and hand building techniques that refer to utility while I expand upon these traditions with additions of my own creations such as unique three-dimensionally printed dies that I combine with industrial processes such as the extruder or slip casting.

Color, scale, and presentation are carefully considered. I employ large areas of one color to contrast with another. These contrasting tonalities define both the elements and the structure of the sculptures. In industry, the colors of building materials are branding techniques for companies; I incorporate the same ideas looking for surfaces that are “mine” while reflecting those ideas. Unusually bright glazes or paints work adjacently to similar colors that are more dry and dull, which gives a viewer a sense of history to consider. All of the surfaces are integrated with their forms as if there is no relation between surface and form, but rather just one. The way in which I compose is directly related to the ideas found in avant-garde design. Relating ideas include building in original ways that transform the space the object rests in as well as making the viewer aware of the space they inhabit.

Contemporary architectural feats, as evidenced in the Olympic building in China for example, drive me to build compositions with ideas relating to monumentality, remembrance, and landmark. Architects Jacques Herzog, Pierre de Meuron (Herzog & de Meuron), Stefan Marbach, Li Xinggang and artist Ai Weiwei worked jointly on the stadium. They created something that is purely form and structure. The inside is the outside and the materials needed for the construction were used in ways never seen before.

Like this landmark, I create compositions that stem from an obsession to construct in unique and precarious ways that I don’t often see. When translated to art objects, they become unconventional compositions for myself as well as viewers to investigate. I’ve become fixated on these quirky and idiosyncratic building processes, as well as the playful, unplanned assembly of each piece that gives my work a sense of remnant. These fixations relate inherently to the freedom I see in contemporary design and architecture that exists all around me. It is my intention that as I build imaginatively each piece is connected with these ideas I carry.