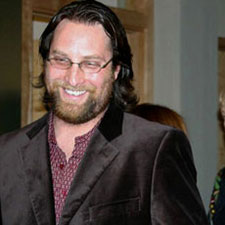 Having grown up near the ocean, I spent a considerable portion of my later childhood exploring the shallow tide pools of the Pacific Ocean off the coast of Southern California. My recollection of discovering various life-forms occupying these shallow tidal regions, along with being an avid scuba diver for over twenty years has had a direct influence on my work. However, while many of the diverse marine forms are sources of visual and formal influence, I also draw inspiration from sources ranging from microscopic images of pollen to the exotic durian and jackfruits of Southeast Asia. Inspired by the work of Ernst Haeckel, his 1904 book of drawings, Kunstformen der Natur/Art Forms of Nature has served as a visual thesaurus for my work over the years.

I am a guarded person by nature, prickly on the outside but deeply vulnerable on the inside. The objects I create are the by-products of trying life experiences; long and personal investigations of an abusive childhood and recently, the death of my mother. After a long and brutal battle with cancer, her passing devastated me and only recently have I been able to truly accept the reality of her permanent absence. During the last six months of her life, I also became a first time father of a little girl. The overlap of these two life changing events ramped up the aggressiveness of the work, and having a daughter heightened the protective lens I now view life through. The primal need to protect my little girl, along with coming to grips with the loss of my mother began to resonate within my art. While my art has always been cantankerous, the openings began to recede deeper into the vessel, becoming more protected with more and more “sub-interiors” protecting the visceral “soft spot”. The parallel between the experiences of life and death began to blur into each-other within the context of my work.

With the natural world as my muse and the vessel as my vehicle, my ceramic sculptures are the creative articulation of these formative experiences and echo the characteristics of my guarded personality. Formally, my work reflects a keen interest in structural defense mechanisms found in nature, and my forms swell with bravado, often adopting aggressively inflated or recoiling postures in a fight-or-flight state, always protecting the vulnerable, gutty interiors. I aim to create enigmatic and uncategorized art-forms that seductively lure the viewer in only to physically deny and repel if clumsily prodded. My agenda is not to recreate what already exists in the world, but rather to create objects that are hybrids; the result of a blending of ideas begging the question; "is it animal, mineral, or vegetable?" Through this fusion, I aim for my work to come to life within arm's reach, where eyesight blurs into touch.

Combined with exteriors that flaunt thousands of dazzling lustered spines or noxious and toxic encrusted skins, I weave a vibrant electric warning palette into my sculptures through a marriage of color and form. By juxtaposing the semiotics of these brilliant and alarming colors in combination with spiny physical defense barriers, I stress the presence of my guarded nature within the work. At the end of the day, my artwork is the manifestation of my exploration of the self and the investigation of territoriality, defense mechanisms, and most importantly, vulnerability.