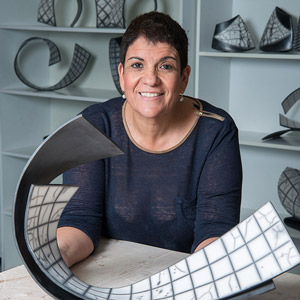 Even-Chen exploring the relationship between “free” three-dimensional space and two-dimensional geometric surfaces, giving a visual meaning without restricting the movements.

She examining the material’s point of collapse and dealing with non-defined shapes, giving way to a new abstract, organic and free forms.

Her works are dealing with tension and balance at different levels such as: physical balance, tension between which is planned and which is not; between the expected and unexpected etc., all come from her scientific base of thinking.

Borrowed from graphic paper, the grid-like pattern that covers her works offers a precise, scientific result. Although the works appear to be floating in midair, lacking any center of mass, the black color formed during the firing process using the Naked Raku technique bestows the illusion of gravitational grasp.

In 2011, she was elected as a member of the International Ceramic Academy (IAC).

Since 2000 her artworks have been selected and exhibited at domestic international exhibition all over the world. She won multiple and significant international awards in the last 11 years. Her artwork became part of major museums collections in Germany, Italy, Spain, China, Korea, Ireland, Swaziland, USA and Israel, as well as Galleries collection (Slovenia and Australia) and private collections at different countries all over the world.

During the recent years, she was a Jury member of several International Competitions.