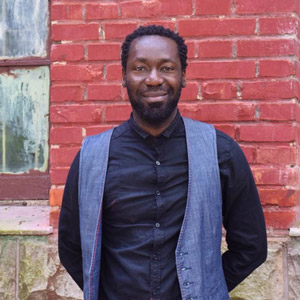 Stanis Mbwanga focuses his work on the search for codes that can exhume, questions and shown the direct links between good economic health of some multinationals and wars repetition. It mainly targets the one operating in the sector of new information and communication technologies that sprinkling blood through the wars provoked to extract the raw materials like Colombo tantalite (Coltan) in the East of his country, or the oil in Libya, Iraq or natural gas in Syria.

Concretely rendering the aforementioned facts, via a graphic design and set of materials present on his work, elements not taken at random, he deals with the major economic issues of today. And misdeeds of technological advance. Sometimes collagist, he uses prepaid cards or motherboard of electronic devices (Mobile phone) to express about this highly sensitive subject.

Also, as an artist haunted by the desire to awaken and liberate his own until then in prism of politico-economic slavery, he exploits likewise, subject relating to culture. Hammering on his own, which he finds in perdition, he does not hesitate to represent scarification coming into music with the schematic aspect of printed circuit he exploits. At the same time, he prunes the valorization of his own culture as the Chinese did, while opening himself to others in this global village.

Stanis Mbwanga is visual artist born in ISIRO, DR Congo, 1982. Where he lives and works, after his studies at the Academy of Fine Arts in Kinshasa where obtained bachelor degree +3, he joined the SADI Collective, Artists solidarity for Integral Development. A group of young artists who working in inter-influences Concept. Then in 2013 left for China where got his MFA in ceramic Design.

He participated in various workshops, residencies, exhibitions in DR Congo and China. Members of IAC, International Academy of Ceramic, Assistant teacher at the Academy of Fine Arts in Kinshasa. He is from the generation of artists who have opted new artistic practices and the adaptation of themes relating to the realities of their immediate environment.