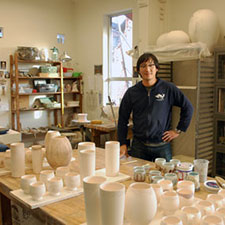 The objects I create collect elements of form, decoration, color and material from various cultures while questioning failure, expectation and intent. They offer a collision of influences from various origins--Chinese, Korean, French, Dutch, English, Minoan, etc. reflecting my passion for historical ceramics and insights on the past. Ceramic production has long been influenced by an industrial standard of perfection and I commit myself to the integrity and craftsmanship of form and decoration in each piece. Deconstructing and imploding the forms creates a visceral reaction that defies the human desire for perfection and confronts the perception of value. It is in this act that I hope to challenge and redefine what is beautiful.

Steve has lectured extensively in North America and Asia. In March 2013 he participated on a panel, “Americans in the Porcelain City,” at the Metropolitan Museum of Art in New York. In 2013, he was one of several international artists invited to participate in “New Blue and White,” an exhibition at the Museum of Fine Arts in Boston that featured contemporary artists working in the blue-and-white tradition of ceramic production. In the Fall of 2016 his work will be featured as part of the Renwick Invitational at the Smithsonian Museum in Washington, D.C.