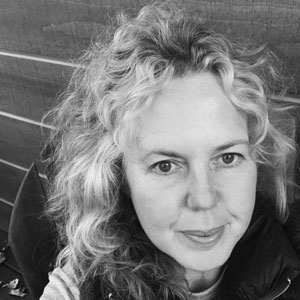 The core of my own work is based in ceramic sculpture. During the past several years, I have been producing sculptures and installations which utilize hundreds of bound & tied linear ceramic forms, and shifting lighting conditions allowing shadows to mark the wall and become an extension of the work. My process is labor intensive, borderline meditative, as I work with multiple parts, combining each to create a new landscape or unforeseen arrangement. Most recently, I have been working in photography to make large scale digital prints of staged shadow imprints which I refer to as shadow drawings. These photographs along with my sculptures are purposefully ambiguous. I want for the viewer to question the material that was used to create the works and also question the abstraction and its reference to nature and utilitarian forms. It is my intention to engage the viewer with the work in hopes of revealing a personal association and new discovery.

Tara Thacker is a visual artist working primarily in porcelain to create sculptures and large-scale wall pieces made of thousands of individually made components combined to create an effect of fluidity and soft appearance that challenges the normal assumptions of the material. She was born in Lynchburg, Virginia and pursued her studies in ceramics and sculpture at Virginia Commonwealth University where she received her BFA in 1992. She then moved to Seattle to attend the University of Washington and received her MFA in Ceramics in 1995. After graduate school, she pursued teaching and held several adjunct and visiting artist positions throughout the southeast. She was a resident artist at Vermont Studio Center in 1999 and the following year joined the staff holding various positions, the last being Visual Arts Director from 2012-2019. She lives in Eden Mills, Vermont and is currently an Assistant Professor of Sculpture at Northern Vermont University in Johnson.