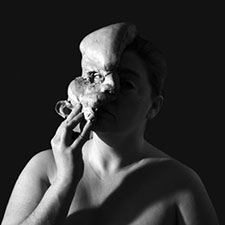 Classical Greek corporeal models have had a tremendous influence on Western Culture: portrayed in whole-bodied, symmetrical, and blemish-free marble statuary, their rules for bodily proportion were set forth by Polykleitos in the Kanon, and reinforced by the Roman architect Vitruvius in de Architectura. My work explores a corporeality that diverges from such ideals.

In most cultures wounds and blemishes are considered to be repulsive. The healthy and socially active body must be whole and its skin must be clear, without sign of illness or decay. Disfigurements in the form and the surface of the human body are marginalized. Those who bear such marks are estranged from public life, and are often animalized. One famous example is that of the late Joseph Merrick, otherwise known as Victorian England’s “Elephant Man.” Merrick was plagued with Proteus disease, a rare affliction accompanied by gigantism of the limbs and various dermatological complications. It distorts the features of those who bare its mark.

My most recent project, Pre Human, Posthuman, Inhuman, is a performance and video series that employs raw clay masks and ‘prosthetics’ as a means for altering the human body. It addresses changing human bodies in six acts entitled Simians, Early Humans, Hybrids, Races, Proportions, and Posthumans, respectively. It is not merely a didactic or chronological enactment of the evolution of the human body, but rather an acknowledgement of the ways in which our notions of bodies have migrated throughout time and have been manifested in the arts and sciences.

This work takes into account the 20th century psychotherapist Paul Schilder’s writings in The Image and Appearance of the Human Body. He theorized that the body image is in continual flux, and stressed its mobility, flexibility, and fluidity. He emphasized the changing nature of the body image and stated, “It is the continuous build-up of a shape which is immediately dissolved and built up again."1 The plasticity of clay enables me to transcend the boundaries of my skin. By manipulating my physical borders, I perform a protean identity.

Clay is a material that has been mythically linked with physical embodiment for millennia and across myriads of cultures. It can implicate a hairless, fleshy landscape and emulate the skin’s life-glow. As clay dries it takes on the delicately withered patterns of the aging body. Its mutable nature and transformative properties allow for a process through which I seek transmutation.

Pre human, Posthuman, Inhuman, the video series, is available on both DVD and Blu-ray.